Thomas de Hartmann (1885-1956) is best known today for the series of piano pieces he transcribed/composed in partnership with the Armenian mystic and general whack-job George Gurdjieff, but on evidence here he was a composer of considerable talent. The four pieces offered on this splendidly performed and engineered disc are all premieres, part of a larger project to records all of his major works on a variety of labels. The songs, chamber and (non-Gurdjieff) piano work have already appeared on Nimbus, and at time of writing this review three discs of orchestral music are “in the can.” That’s a very lucky thing, because conductor Theodore Kuchar was forced to flee Lviv just days ago due to Russia’s insane invasion of Ukraine, and God only knows what will happen to the city and its fine orchestra, which is scheduled to tour the US in February, 2023. We can only pray for their safety.

Koliadky is a suite of nine imaginary Ukrainian Christmas carols scored for various instrumental combinations, with the last of them, Goussak, employing the entire orchestra for the first time. The music is simply exquisite: haunting and unforgettable in its purity and simplicity. It may sound like folk music, but it really isn’t. Rather Hartmann was channeling his inner Ukrainian with unflagging sensitivity and grace (like Prokofiev, he was born in what is now Ukraine, and he obviously identified with that part of the world quite deeply). Symphonie-Poème No. 4 is all that we have of his projected Fourth Symphony. A single movement a bit over five minutes long dating from 1955, just before his death, it’s a wonderfully bold, colorful orchestral extravaganza that whets the appetite for the earlier “symphonies-poèms,” the first of which lasts over 66 minutes and ought to be quite something (or so I’m told). It’s been recorded by these forces and hopefully we’ll have a chance to hear it soon.

The Concierto Andaluz, for flute, strings and percussion, is a brief piece in three short movements written for Jean-Pièrre Rampal in 1949. I love this Spanish-flavored stuff, and at a mere ten minutes for the whole shebang it really leaves you wanting more. Turkish flutist Bülent Evcil does an excellent job in capturing the music’s high spirits and exotic lyricism, while Kuchar’s accompaniments are by turns sensitive and swaggering. Finally, we have a very substantial (33 minute) ballet suite from the quasi-neoclassical Une fête en Ukraine, a series of dances that starts as if it wants to be baroque, but quickly journeys farther afield. I mean, how many baroque dance suites include an “Incantation and Dance of the Shaman?” The seven-minute overture is the largest single movement on the disc, and really does whet the appetite for Hartmann’s works in larger forms.

I have no hesitation in regarding this release as one of the great discoveries of recent years. Thomas de Hartmann was the real deal. If you can’t find the disc from the usual online culprits, you can get it directly from the Toccata Classics website (https://toccataclassics.com/shop/recordings/). Don’t miss it! 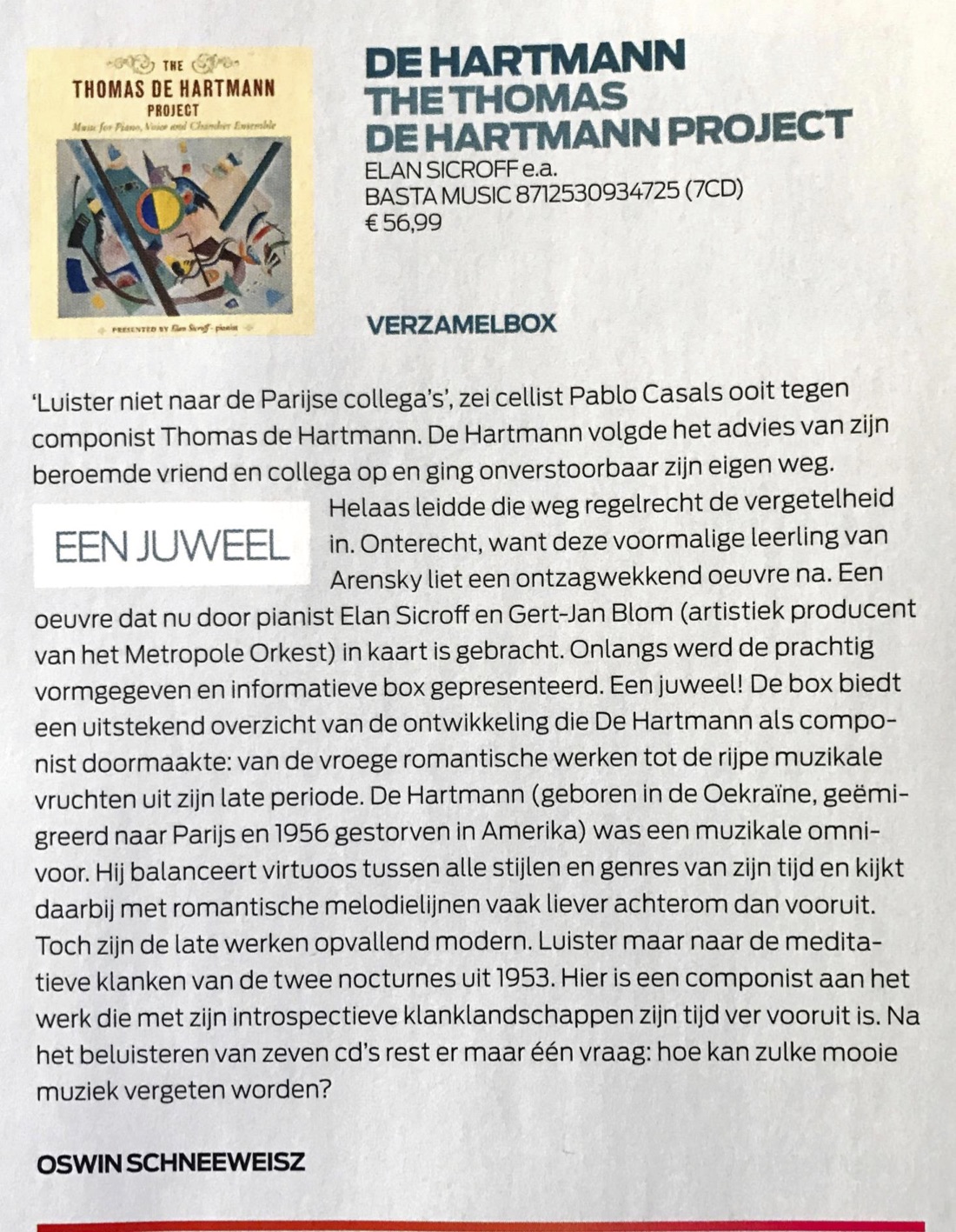