I’m sure there must be many readers of MWI who feel that music is often valedictory, sometimes transcendental and even, occasionally, prophetic. The Ukrainian composer Thomas de Hartman’s Violin Concerto was premiered in Paris in 1947; it is a piece where the composer asks the listener to better understand his music by imagining the ghost of a celebrated violinist wandering by night through the war-devastated Ukrainian Steppes. That this disc under review arrived some 75 years later, featuring the music of this same Ukrainian composer, performed by a major Ukrainian orchestra, whilst Ukraine herself is unaccountably being devasted by war, may give pause for thought to more people than just me.

De Hartmann – not to be confused with Karl Amadeus Hartmann – was born in 1885 in Khoruzhivka, now northern Ukraine, into a Russian aristocratic family. The family wealth allowed him the freedom to pursue his passion and study music and he could count amongst his teachers such Russian greats as Arensky, Taneyev and Rimsky Korsakov. In 1906, at 21 years of age, his four-Act ballet was performed at both the Imperial Opera Houses of Moscow and St Petersburg with Vaslav Nijinsky, Anna Pavlova and Michel Fokine, no less, dancing the principal roles; he was, at that time, one of the best-known living composers in the whole of Russia. However, the explosive early trajectory of his career appears to have been permanently derailed first by his being recalled at the start of the First World War in 1914 from Munich, where he was studying with Felix Mottl, to serve as an army officer, before the Russian Revolution three years later forced him, as a member of the aristocracy, to flee Russia with his wife to Tbilisi the capital of Georgia which, at the time, was an independent Republic. There, an affiliation with the cult of the Russian mystic/philosopher George Gurdjieff followed, resulting in the composer living at various times in Constantinople, Berlin and Paris after which, having had to flee the Nazis, he finally ended up in New York after the war. This constant relocation could go some way to explaining how his music, which includes four symphonies, several operas and ballets, concertos, sonatas and songs, never quite gained a foothold either locally, or in the wider repertoire, even though it was championed by significant musicians of the time, such as Leopold Stokowski, Serge Koussevistsky, Pablo Casals, Paul Tortelier and Jean-Pierre Rampal. Instead, he was forced to make a living from writing film scores, of which there are over fifty. The debut concert dedicated to his music planned in New York in 1956 sums up everything: the composer – perhaps on the cusp of belated recognition – died of a heart attack at the start of the rehearsals.

Half a century after his death, the Thomas de Hartmann Project was set up as a major initiative to recover and re-evaluate his musical legacy. Some of the earlier issues of his solo piano music have already been released (on Nimbus) and reviewed here on MWI and happily, this disc of orchestral works is also a result of the project. Much appreciation and acknowledgement therefore should be given to Toccata Classics for stepping up to give us, the listeners, the chance to judge for ourselves the merits of his orchestral music in these premiere recordings.

Of course, at this time of writing in early 2022, with the unimaginable tragedy that is currently unfolding in Ukraine, I dearly hoped that we could enjoy listening and reviewing a disc dedicated to a hitherto unknown Ukrainian composer, performed by a Ukrainian orchestra – and I am happy to report that very little effort was required to sit back and do just that. If the aforementioned Violin Concerto is not included in this particular release, we are instead presented with a ballet suite, a flute concerto, a symphonic poem, plus a collection of Christmas music, all of which reveals de Hartmann carrying the flame of the more central Russian musical tradition set by his teachers Arensky and Rimsky Korsakov, which was also followed by the likes of Glazunov, Khachaturian and Rachmaninov, rather than the more different, but still recognisably Russian, paths chosen by the enfants terribles Stravinsky and Prokofiev, or the greyer, more obviously Soviet-repressed style of Shostakovich. All the music on this release is hugely approachable, richly scored, colourful and melodic with perhaps a more cosmopolitan flavour than that of the other composers mentioned, reflecting the more diverse cultures de Hartmann experienced during his lifetime.

I started by listening to the longest piece, the ballet suite Une fête en Ukraine from 1940 and based on Catherine the Great. The overture opens with terrific horn fanfares and a rich, glittering orchestral response which at once evokes the theatre – right from the opening bars, you can practically smell the grease-paint and sense the corps de ballet waiting impatiently in the wings for the action to start. Any listener who appreciates the scores of Glazunov’s Raymonda or The Seasons would easily recognise the idiom and find much to appreciate, as well as enjoy, here, and if, perhaps, the music doesn’t quite reach the emotional heights of Tchaikovsky and Prokofiev in their own ballets in the grand Russian tradition, then that is only because few others – if any – do either.

Very different in scale, but no less memorable, is the suite Koliadky: Noëls Ukrainiens from 1940 which opens this release and is a collection of nine musical numbers, none of which lasts for much more than three minutes, tand which the composer described as “charming reminiscences of past times” celebrating the tradition of singing koliadky (carols) on Christmas Eve – something that was ended by the strictly secular Soviet state. Each number is scored for a different group of instrumentalists, with only the final one being for full orchestra, and between them they encompass all the wonder and mystery of the Nativity, as well as the joy of Christmas.

The ten-minute Concierto Andaluz, written in 1949 for Jean-Pierre Rampal, no less, and scored for solo flute, strings and percussion, differs markedly from Bartók’s similarly named and scored composition with its shimmering Iberian colours and warmth, shows how de Hartmann’s composing style was no doubt influenced by the various international locations where he lived during various stages of his life. Here, the combination of imaginative orchestration shot through with the heat of Spain results in a highly enjoyable piece of music; I only wished it lasted longer than the all-too-brief time the composer allows.

The final piece on this disc, the Symphonie-Poème from1955, might eventually have been the opening movement of de Hartmann’s Fourth Symphony had he not died the following year, although one suspects that this busy, five-minute piece might have been expanded somewhat if it had. There is more than a hint of Prokofiev in the muscular-sounding orchestration and maybe the highest compliment I can pay is that I wondered where a four-movement symphonic journey would have ended after such an auspicious beginning. Olga de Hartmann, the composer’s devoted wife, considered the music to be so significant that she had the first four notes of the work inscribed upon her husband’s tombstone. It is indeed rich in promise if, sadly, too short-lived to deliver anything genuinely substantial.

Toccata Music not only gives us over an hour of music here on this disc, but does everyone proud with the excellence of the presentation too – the release is available on CD or download (mp3/FLAC/ HD WAV) with a 25-page booklet containing extensive background notes on the composer and performers (that can also be downloaded as a separate pdf file). The sound is rich and full, and the music-making under the conductor Theodore Kuchar and the Lviv National Philharmonic Orchestra of Ukraine, as well as the excellent flautist Bulent Evcil in the concerto, is as committed and persuasive as anyone could wish for. Apparently, there are more orchestral discs to be released from the same sources of music by the same composer and I, for one, cannot wait to hear them, as all the music on this disc is highly distinctive and hugely enjoyable. Meantime, the present release is recommended with much enthusiasm as is, at long last, the music of Thomas de Hartmann in general. 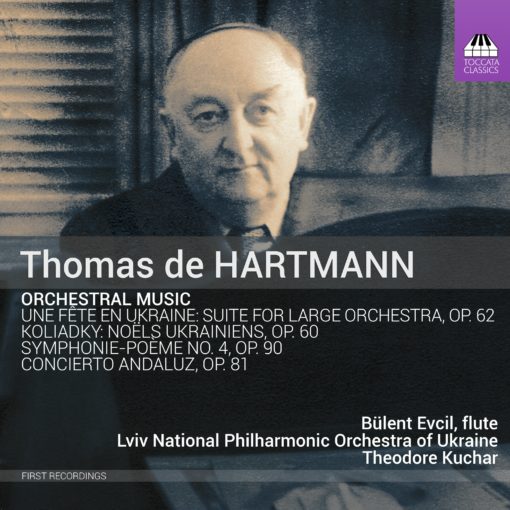